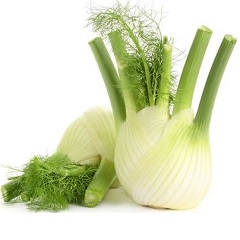 Use: Used for various digestive problems including heartburn, intestinal gas, bloating, loss of appetite, and colic in infants among others.

Fennel is a flowering plant species in the carrot family. It is a hardy, perennial herb with yellow flowers and feathery leaves and pleasant-smelling. It is indigenous to the shores of the Mediterranean but has become widely naturalized in many parts of the world, especially on dry soils near the sea-coast and on riverbanks.
It is a highly aromatic and flavorful herb used in cookery and, along with the similar-tasting anise, is one of the primary ingredients of absinthe. Dried fennel seeds are often used in cooking as an anise-flavored spice. But don't confuse fennel with anise; though they look and taste similar, they are not the same. Fennel's dried ripe seeds and oil are used to make medicine.
Fennel, is erect, glaucous green, and grows to heights of up to 2.5 meters, with hollow stems. The leaves grow up to 40 centimeters long; they are finely dissected, with the ultimate segments filiform (threadlike), about 0.5 millimeters wide. (Its leaves are similar to those of dill, but thinner.) The flowers are produced in terminal compound umbels 5–15 centimeters wide, each umbel section having 20–50 tiny yellow flowers on short pedicels. The fruit is a dry schizocarp from 4–10 millimeters long, half as wide or less, and grooved. Since the seed in the fruit is attached to the pericarp, the whole fruit is often mistakenly called "seed".
Fennel is used by mouth for various digestive problems including heartburn, intestinal gas, bloating, loss of appetite, and colic in infants among others. It is also used on the skin for excessive body hair growth in women, vaginal symptoms after menopause, and to prevent sunburn. But there is limited scientific evidence to support most of these uses. Fennel might relax the colon and decrease respiratory tract secretions. Fennel also appears to contain an ingredient that may act like estrogen in the body.