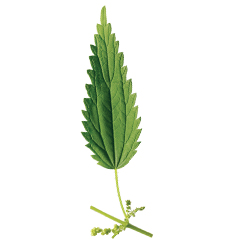 Use: Used for urination problems

Urtica dioica, often known as common nettle, or just a nettle, is a herbaceous perennial flowering plant in the family Urticaceae. Originally native to Europe, much of temperate Asia and western North Africa, it is now found worldwide, including New Zealand and North America. The species is divided into six subspecies, five of which have many hollow stinging hairs called trichomes on the leaves and stems, which act like hypodermic needles, injecting histamine and other chemicals that produce a stinging sensation upon contact.
Nettle is a dioecious, herbaceous, perennial plant, 1 to 2 m tall in the summer and dying down to the ground in winter. The soft, green leaves are 3 to 15 cm long and are borne oppositely on an erect, wiry, green stem. It bears small, greenish or brownish, numerous flowers in dense axillary inflorescences. The leaves and stems are very hairy with non-stinging hairs, and in most subspecies, also bear many stinging hairs (trichomes or spicules), whose tips come off when touched, transforming the hair into a needle that can inject several chemicals causing a painful sting or paresthesia, giving the species its common names: stinging nettle.
The plant has a long history of use as a source for traditional medicine, food, tea, and textile raw material in ancient societies.
People use the root and above ground parts as medicine. Stinging nettle is used for many conditions, but so far, there isn’t enough scientific evidence to determine whether or not it is effective for any of them. Stinging nettle root is used for urination problems related to an enlarged prostate (benign prostatic hyperplasia [BPH]). These problems include nighttime urination, too frequent urination, painful urination, inability to urinate, and irritable bladder. Stinging nettle root is also used for joint ailments, as a diuretic, and as an astringent. Stinging nettle above ground parts are used along with large amounts of fluids in so-called “irrigation therapy” for urinary tract infections (UTI), urinary tract inflammation, and kidney stones (nephrolithiasis). The above-ground parts are also used for allergies, hayfever, and osteoarthritis. Some people use the above ground parts of stinging nettle for internal bleeding, including uterine bleeding, nosebleeds, and bowel bleeding. The above ground parts are also used for anemia, poor circulation, an enlarged spleen, diabetes and other endocrine disorders, stomach acid, diarrhea and dysentery, asthma, lung congestion, rash and eczema, cancer, preventing the signs of aging, “blood purification,” wound healing, and as a general tonic. Stinging nettle above ground parts are applied to the skin for muscle aches and pains, oily scalp, oily hair, and hair loss (alopecia).
Stinging nettle leaf has a long history of use. It was used primarily as a diuretic and laxative in ancient Greek times. Stinging nettle contains ingredients that might decrease inflammation and increase urine output.