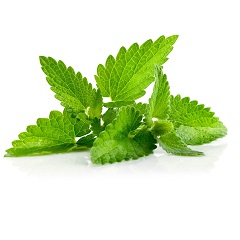 Use: Bruised or crushed leaves smell like lemon. Fresh Lemon Balm leaves can be added to salads and soups. Bees love it and its genus name, Melissa, means honeybee or bee. Traditionally, the plant has been used to treat nervous or sleep disorders. Its neuroprotective and sedative effects are documented.

Lemon balm (Melissa officinalis), balm, common balm, or balm mint, is a perennial herbaceous plant in the mint family Lamiaceae and native to south-central Europe, the Mediterranean Basin, Iran, and Central Asia, but now naturalized in the Americas and elsewhere. It grows to a maximum height of 70–150 cm. The leaves have a mild lemon scent similar to mint. During summer, small white flowers full of nectar appear.
The leaves are used as an herb, in teas, and also as a flavoring. The plant is used to attract bees for honey production. It is grown as an ornamental plant and for its oil (to use in perfumery). The tea of lemon balm, the essential oil, and the extract are used in traditional and alternative medicine, including aromatherapy. The plant has been cultivated at least since the 16th century, but research is still being conducted to establish the safety and effects of lemon balm.
Rosmarinic acid appears to be the most important active component, but the interaction of chemicals within lemon balm, and with chemicals in other herbs with which it has been commonly used in traditional medicines, is poorly understood. Lemon balm leaf contains roughly 36.5 ± 0.8 mg rosmarinic acid per gram.
Lemon balm is used for digestive problems, including upset stomach, bloating, intestinal gas (flatulence), vomiting, and colic; for pain, including menstrual cramps, headache and toothache; and for mental disorders, including hysteria and melancholia. Many people believe lemon balm has calming effects so they take it for anxiety, sleep problems, and restlessness. Lemon balm is also used for Alzheimer's disease, attention deficit-hyperactivity disorder (ADHD), an autoimmune disease involving the thyroid (Graves' disease), swollen airways, and rapid heartbeat due to nervousness, high blood pressure, sores, tumors, and insect bites. Lemon balm is inhaled as aromatherapy for Alzheimer's disease. Some people apply lemon balm to their skin to treat cold sores (herpes labialis). In foods and beverages, the extract and oil of lemon balm are used for flavoring.