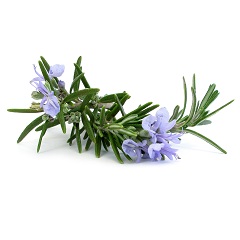 Use: Rosemary ointment is used as a cure for muscle and joint pain.

Salvia rosmarinus, commonly known as rosemary, is a woody, perennial herb with fragrant, evergreen, needle-like leaves and white, pink, purple, or blue flowers, native to the Mediterranean region. It is a member of the mint family Lamiaceae, which includes many other herbs. Rosemary has a fibrous root system.
Rosemary is a widely used culinary spice. The plant has been used in traditional medicine for its astringent, tonic, carminative, antispasmodic, and diaphoretic properties. Extracts and the volatile oil have been used to promote menstrual flow and as abortifacients. Rosemary extracts are commonly found in cosmetics, and a lotion of the plant has been said to stimulate hair growth and prevent baldness. Historical reports regarding the therapeutic use of rosemary as a medicinal plant are available. Rosemary, one of the oldest known medicinal herbs, was used centuries ago to enhance mental function and memory.
In foods, rosemary is used as a spice. The leaf and oil are used in foods, and the oil is used in beverages. In manufacturing, rosemary oil is used as a fragrant component in soaps and perfumes.
Preliminary evidence suggests that rosemary oil may help reduce tissue inflammation that can lead to swelling, pain and stiffness. It may do so by stemming the migration of white blood cells to injured tissues to release inflammatory chemicals. When people with rheumatoid arthritis were given 15-minute knee massages using a rosemary oil blend three times weekly, they had a 50% decrease in inflammatory knee pain in two weeks, compared to a 12% decrease in those not given the oil. Rheumatoid arthritis is an autoimmune condition in which your body’s own immune system attacks tissues, such as knees and other joints, injuring the joint lining and causing inflammation.
Rosemary has a wide variety of volatile and aromatic components. The plant’s leaves contain 0.5% to 2.5% of volatile oil, with major components including monoterpene hydrocarbons (alpha- and beta-pinene), camphene, limonene, camphor (10% to 20%), borneol, cineole, linalool, and verbinol. Flavonoids in the plant include diosmetin, diosmin, genkwanin, luteolin, hispidulin, and apigenin. Other terpenoid constituents in rosemary include triterpenes oleanolic and ursolic acids and diterpene carnosol. Phenols in rosemary include caffeic, chlorogenic, labiatic, neochlorogenic, rosmarinic, and salicylic acids.